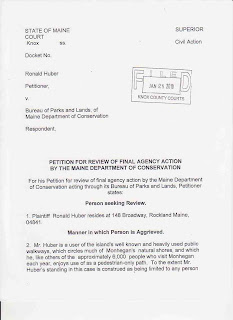 A Rockland man has filed suit in Knox County Superior Court, seeking suspension of a  December 14th decision by the Bureau of Parks and Lands that designated two square miles of ocean south of Monhegan as the Maine Offshore Wind Energy Research Center.

"Maine is wasting a marvelous chance to do ocean energy projects in state waters right the first time. Instead  it is assuring investors their projects will be subject to minimal review." said Huber.  He said that although meaningful rules and regulations for offshore windmill site selection and management don't exist yet, the state is racing ahead anyway to parcel out its portion of the Gulf of Maine.   "I'm awarding the DeepCwind consortium a C-minus," he said.

"We've seen what the Gold Rush did to California's salmon streams. What rushing ahead on bailing out Wall Street has accomplished for our economy. What rushing into the Patriot Act has done to the structure and integrity of our security agencies. Why is the Department of Conservation rushing so blindly  forward on authorizing the  state's ocean wind energy research center off Monhegan?  Do it right!  The wind's not going anywhere."

The State of Maine could thoughtlessly degrade irreplaceable scenic and ecological natural assets of state and national significance there, by fast tracking  offshore wind plan without consulting most Monheganites, without calculating the dollar value of the damage such projects could have on Monhegan's thriving tourism industry. Without calculating, using standard metrics, the visual and sonic impacts windmill operations day and night could have on Monhegan visitors and island residents. On its fish and fishermen. Its lobsters and lobstermen.

"Why is ignorance bliss for the Bureau of Parks and Lands? Our state doesn't need to become part of a Gulf of Maine Wind Rush.   As shown at conference after conference, the industry has shown it has the smarts, the talent and the ability to gain a tremendous amount of environmental and social impact data before, during and after the experimental deployments at the Maine Offshore Energy Test Center.  The Bureau of Parks and lands should make gaining that critical data part of the deal with the University.

Rushing the birds. Huber noted to the court the non-evaluation by the state of the chance, small or large, that  indivduals of the dozens of bird species that visit Monhegan or live there year round will fall prey to a bladestrike. Maine Audubon's Monhegan surveys, and the visits of numerous other birders familiar with Monhegan reveal with great detail how Monhegan and its surrounding waters are the haunts of  Canada Geese, Wood Ducks, Black Ducks, Mallards,Green-winged Teal , Eiders, Scoters, Loons, Shearwaters,  Storm-Petrels, Gannets, Herons, Osprey, Sharp-shinned Hawks, Cooper's Hawks, American Kestrel, Merlins,  Peregrine Falcons and Bald Eagles. And many others!

Bird strikes WILL happen" Huber said. "Its a fact of life with offshore wind. Maine Department of Conservation should acknowledge this regrettable truth and work to minimize it right from the start. That's what Research and Development means, not only figuring out the best wind blades, but also figuring out the least damaging methods of  using them.

Ditto for the Monhegan Inner Sou' Sou'west Ground, a  rocky three square mile fishing ground in deep waters SSW of Monhegan. The offshore wind R&D center will encompass part of  this  300 foot deep ground which hosts hake and cusk in early spring, cod and pollock from May until July, and halibut in the autumn.

"The state needs to exhaustively survey the existing state of  Monhegan's deepwater fishery environment, before moving ahead with this necessary exploration of ocean energy extraction."  Huber said. The addition of high relief vertical habitat in the form of floating windmill structures will also attract species not typically seen in the area, to exploit the new habitat.  These non-indigenous organisms may be benign or troublesome to the existing marine fisheries."

"But who's checking?" Huber asked. "Judge Jeffrey Hjelm needs to pull Parks and Lands director Willard's head out of the sand," he said.  "The state must  face the inconvenient truths of ocean wind extraction,that come with the incontrovertible pluses of generating electricity that way.  Willard's December decision is woefully premature."

Rockland resident Ron Huber has acted on behalf of natural Maine since the early 90's. This is his second petition asking Maine Superior Court to turn back agency decisions affecting Penobscot Bay. The first, filed one year ago and still pending, asks the court to overturn Maine DOT's  January 2009 decision to split publically owned Sears Island  in upper Penobscot Bay into an industrial containerport zone and a private conservation easement zone run by Maine Coast Heritage Trust, without following requirements of the Sensible Transportation Policy Act. There is a certain symmetry, he says,  to now trying to protect nature at the opposite end of Penobscot Bay.

Huber admits to a spiritual dimension to his activism.  Describing his efforts as  "faith-based stewardship over the wild places and wild marine life of Penobscot Bay" he informed the court that  his "wild marine congregation of Penobscot Bay organisms" may be at risk from the diversion of hundreds of kilowatts of wind energy from its traditional natural uses in the outer bay marine ecosystem to electricity generation. The ability of the larval young of many members of his flock to carry out the sea surface feeding and respiration necessary to their survival could be badly hampered.

We must not crucify Penobscot Bay on a Cross of Wind." Huber declared.